Thank you for spending the time to look over my work, I hope that you enjoyed looking over it as much as I enjoyed creating it.

If you have any questions and would like to get in touch, please use the form below, drop me an email or give me a quick call. I promise to get back to you as soon as possible.

To work with a team of Business Psychologists and Developers at ETS to improve the usability, functionality and essentially the whole process of ‘concept to completion’ of the ‘base’ systems used to create HR systems for their clients.

The goal was to help improve the system for firstly, the user, to make things as simple, practical and enjoyable as possible. I was also asked to streamline the whole process from pitching to the client, to establishing the client’s needs and being able to deliver precise visual aids to help the client reach an understanding of the system and its functionality. There was also issues with how these concepts were translated into hi-fidelity mock ups and then delivery to development.

On researching the competition in the market, and speaking with users of the current systems, we established a set of functionality needs and the most practical user journey for each type of survey that ETS created for their clients. On creating prototypes and testing these updated systems, we established additional needs which we then added to the ‘base systems’. This gives the user the option to be able to switch on and switch off certain parts of this functionality, to best suit their needs. With this option being built into the ‘base’ system, less time was now required for development on a ‘standard’ client system.

Please see the examples of each stage of the process below.

An example of the excel document myself, and the psychologists and developers created to establish exactly where issues were occurring, from users feedback given to the psychologists in focus groups, to the issues that the developers faced when trying to build the less bespoke client systems. 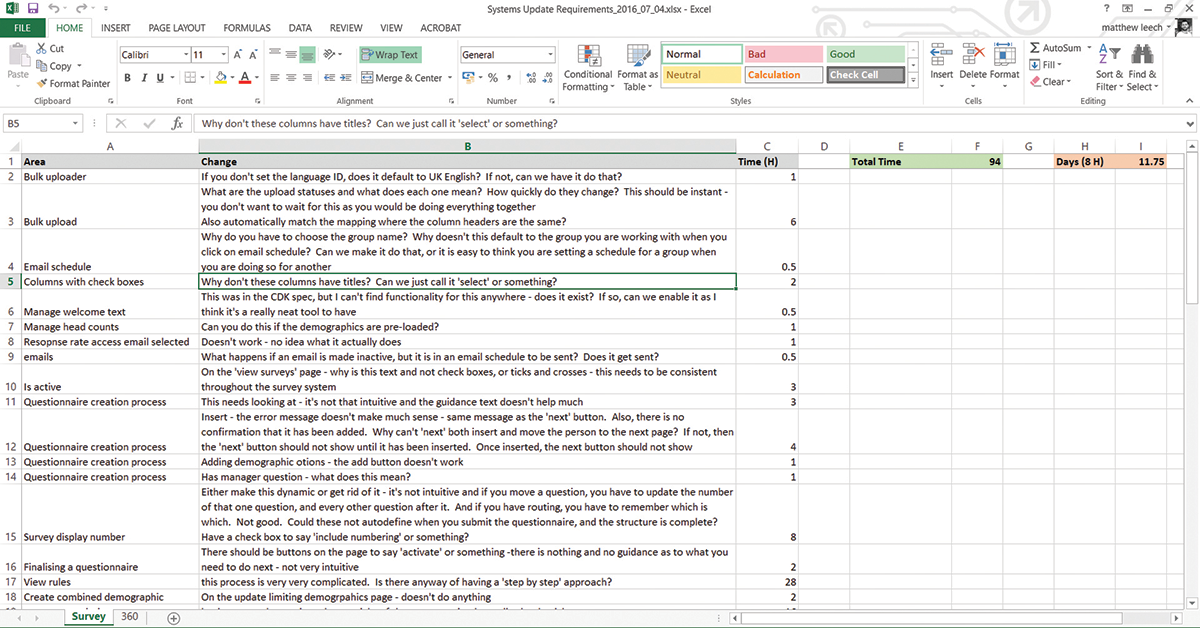 I set out to look at what functionality, products and services were on offer in the HR market, and what technology was being used to create these systems. Aligning the users needs, budget for ETS on development of these base systems, and the time allocated to the developers involved in the project, we were able to establish that what we set out to create, was actually of value to both the user and ETS (the stakeholder).

I created at first, a number of sketches to communicate the basic functionality and user journey of each system to both the developers and the management at ETS. This helped to save time on creating wireframes and prototypes that may not have been feasible to build with time and budget to consider. Off the back of both management and the development team agreeing to the sketches, I set out to create some simple interactive prototypes, of user journeys and functionality to share with user groups (clients and internal testing groups). This was to establish that what we had considered to be the best solution was in fact a solution that was going to help both users of these systems and the developers building them. 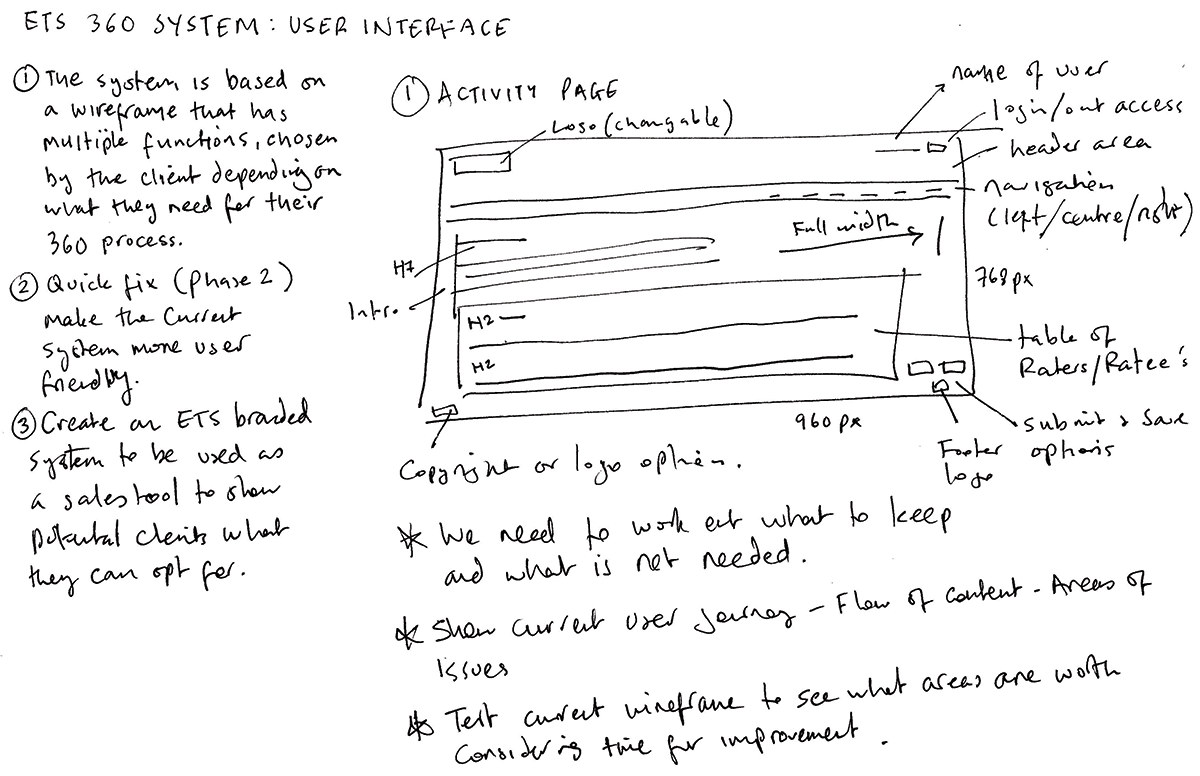 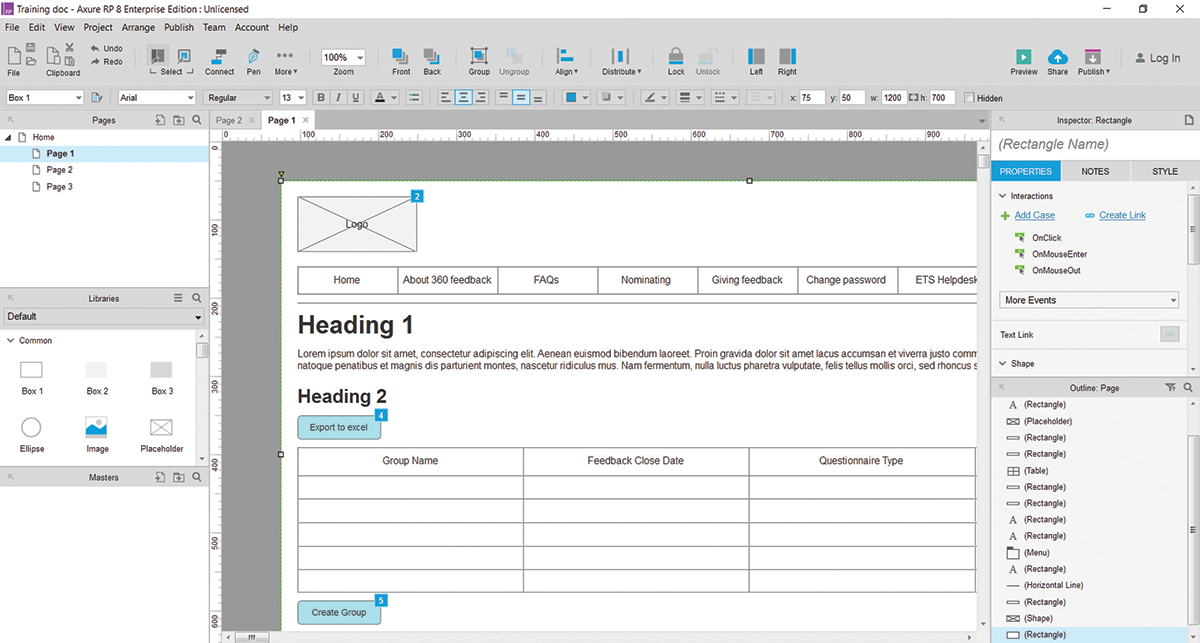 Unfortunately at this stage of the process I was not able to go to the testing sessions myself due to resource concerns. I was asked to create a questionnaire/proposed format of the testing sessions to the team of project managers and psychologists involved, to help them with the focus groups and the conversations that they were to have with the users/clients. This in my part I felt was very unfortunate, as I think that it was important that I be involved at this stage, but as with any project, being flexible and agile with client or be it stakeholder is also important.

I have added a number of mock ups here that I created for both ETS to use to promote their products with clients as a ‘Demo Tool’ and also a set of mock ups that I then created, using this system, for Burberry.

I have shown the example of the Login page, the View Groups page with the drop down functionality and how this would help the user to choose the groups he/she would need for the next stage of the process. The Activity page is essentially the final part of the whole process for the managers input, where the user is able to view the input made by the participants, giving feedback and ratings to these submissions. 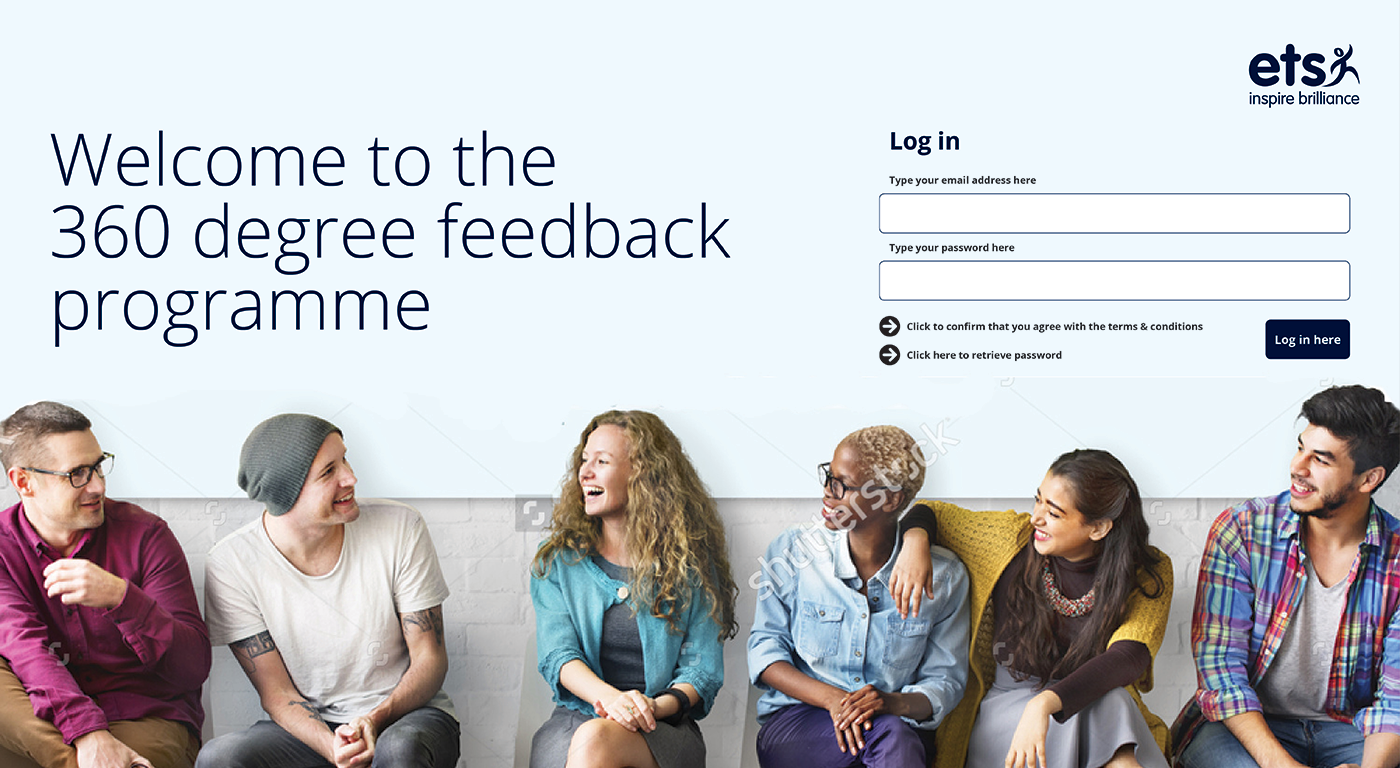 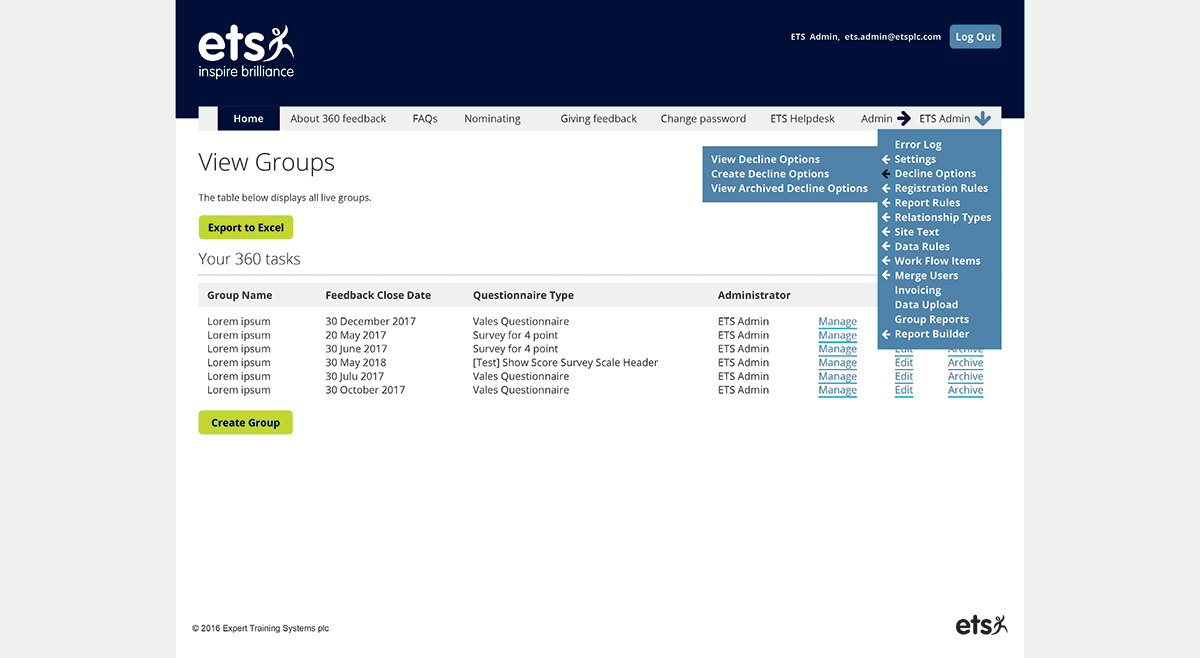 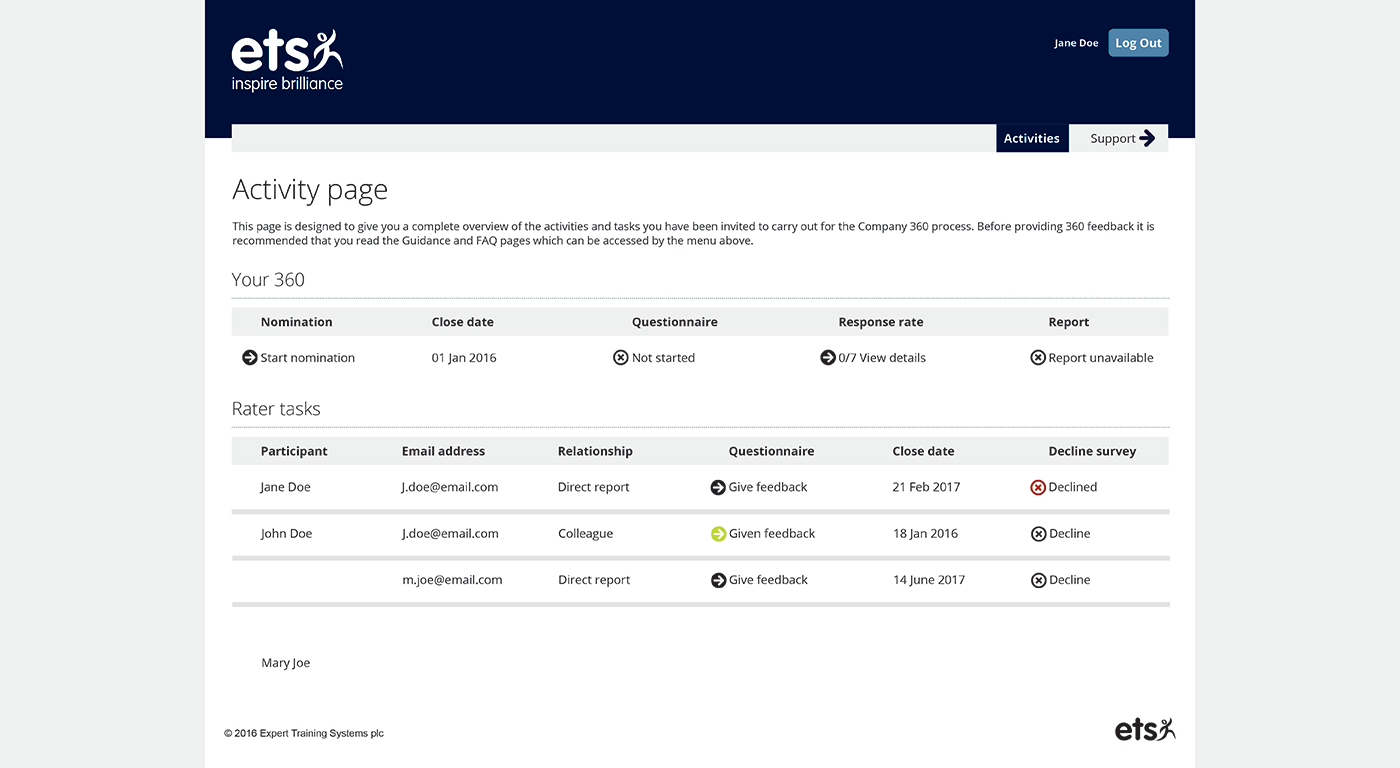 I have added a large number of mock ups here to show the full ‘base system’ and user journey, this is essentially all of the system that would be offered to a client that was in need of what was considered to be standard in the industry. Most of this functionality could be switched on or off by both the users and development teams to ensure that there was no ‘clutter’ or any areas that were confusing to that specific client or user.